10 Compelling Reasons Why an Environmental Career is For You

Trying to decide what to study is always a challenging decision for students. They understand that their college careers are directly impacted by what they focus their attention on — as are their actual careers. No one wants to waste college credits, fail to select the best teachers, increase tuition expenses, or delay graduations. Similarly, most students feel as though their course of study will determine their whole future, and educational experience is one important area that potential employers consider. But as a report from the Bureau of Labor Statistics reminds us, working individuals have held an average of 12.3 jobs during the prime years of their careers. So whether you’re an incoming college freshman, a recent graduate, or a wage earner looking for a change, it makes sense to consider potential jobs — and we think an environmental career is one you ought to think about.

In this post, we’ll discuss 10 compelling reasons why an environmental career could be for you. Want to save the world? Want to do something meaningful? Want to get a little sun while working in the great outdoors? Then studying the environmental sciences and becoming an ecological professional might be a perfect fit. 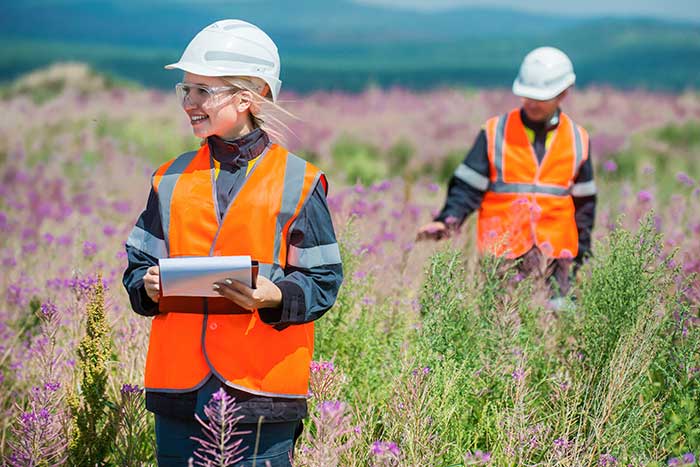 One of the main reasons why people consider working in the environmental industry is that it’s important. In fact, it impacts our lives every single day. Consider just how much our lives rely on the ongoing wellbeing of (to paraphrase 19th century journalist Henry George) our own spaceship Earth. True, the statistics can seem daunting. For instance, Statista reports that:

These numbers can make you feel downcast — or they can inspire you to action. But either emotional response reveals just how important environmental science is for our present and our future. If the message of environmental sustainability and environmental health resonates with you, then an environmental career might just be what you’re looking for.

When looking at the importance of environmental science, studies discuss issues such as carbon emissions, melting glaciers, biodiversity loss and coral reef death. These areas matter, but many don’t realize that you can give two reasons why environmental science is important: It helps the planet, and it helps people.

The natural environment directly impacts human wellbeing — and its misuse disproportionately harms indigenous and disadvantaged communities. Wondering what the importance of studying systems in environmental science is? Consider the quartet of environmental catastrophes that ravaged Japan from 1912 to 1961:

In these cases, environmental issues directly impacted the health of local people.

#3: Embrace Your Passion for the Environment and Animals

With so much at stake, it might seem a little silly to choose the environmental sciences because you love the outdoors or feel particularly endeared to a specific sort of animal. Yet that’s exactly what motivated America’s 26th president to safeguard vast swaths of land. Teddy Roosevelt was grieved by the overhunting of wild game, and he saw overgrazing as a serious threat. After becoming president, one of his acts was to designate 150 national forests and five national parks.

At one point, Roosevelt wrote, “We have become great because of the lavish use of our resources. But the time has come to inquire seriously what will happen when our forests are gone, when the coal, the iron, the oil, and the gas are exhausted, when the soils have still further impoverished and washed into the streams, polluting the rivers, denuding the fields and obstructing navigation.” And you know what? That love of nature can motivate you just as much as it did one of America’s presidents.

To the uninitiated, the environmental industry can seem something of a career cul-de-sac if not an outright dead end. It simply doesn’t offer much in terms of job flexibility — right? No, actually. Nothing could be further from the truth. One of the great advantages of choosing an environmental career is that it’s incredibly flexible. You don’t have to select from one or two positions, such as an environmental engineer or an environmental scientist. You can pick from a wide array of career paths with varying educational and professional requirements.

Waste production is a human problem, one that transcends national boundaries. You see it in the developed world. The EPA notes, “Virtually every resident, organization, and human activity in the United States generates some type of waste. EPA is interested [in waste management efforts] because gas emissions can be affected by recycling and changing product use.” Developing nations struggle, too. The open dumping of plastics throughout Asia has led to a worldwide oceanic crisis. Given that waste and pollution are universal human activities and that many countries struggle to properly manage it, becoming a professional who can help is of utmost importance.

Over the space of thousands of years, the world’s forests have begun to disappear. National Geographic states, “About 2,000 years ago, 80 percent of Western Europe was forested; today the figure is 34 percent. In North America, about half of the forests in the eastern part of the continent were cut down from the 1600s to the 1870s for timber and agriculture. China has lost great expanses of its forests over the past 4,000 years and now just over 20 percent of it is forested.” The impact of deforestation is severe, and in addition to contributing to climate change, it leads to the loss of precious biodiversity and the advancement of erosion. Credentialed environmental professionals, though, have leaped into the breach and are leading the fight to save the world’s forests.

An essential reason why we need good people in the environmental field is the problem of climate change. This carbon-dioxide driven shift in our atmosphere has become evident in almost all of earth’s natural systems as a recent study published by the journal Earth System Dynamics shows. Climate change is a self-evident problem — and one that’s remarkably difficult to tackle. From political to economic to natural considerations, it’s a multi-faceted issue that needs to combine swift action with environmental acumen and cultural sensitivity. If you want to make a big change, then this is why you work in environmental science.

According to Technology Networks, “Extinction rates today are much higher than would be expected due to natural background rates, a situation thought to be a result of increasing human driven environmental pressures such as deforestation and climate change. Currently, more than 38,500 species are threatened with extinction, representing 28% of all assessed species.”

That news is positively shocking: More than one-quarter of all the earth’s species find themselves facing eradication. In addition to the loss to humanity should these animals vanish, there’s also the dignity of the animal kingdom itself to consider. Humans should safeguard other species — not eradicate them. It’s the job of those in the environmental sciences to educate, persuade, and care for endangered species and their ecosystems.

It’s a tricky thing to project population growth into the far future, but one thing seems certain: We will likely have many more people on the planet over the next 100 years, and that fact poses a challenge for everyone. Consider that the United Nations projects that “the world’s population is expected to increase by 2 billion persons in the next 30 years, from 7.7 billion currently to 9.7 billion in 2050 and could peak at nearly 11 billion around 2100.” Those people will need access to food, water, and shelter, and environmental professionals will be poised to help provide it.

Environmental matters aren’t just academic interests or something that future generations will have to deal with. They have a real-world impact right here and now. Consider what environmental hydrologist Jay Zarnetske at Michigan State University’s College of Natural Science had to say: “When you actually go around and you ask somebody to think about water in their everyday lives, they don’t. You have to prompt them. Which is surprising to me because it’s literally at the connection of everything that you’re doing. Where you live, what you grow on your property, the value of your property, the food that you’re eating every day, the technology you’re holding in your hands, all of that has to do with having clean, freshwater resources.”

Similarly, Dr. Catherine Courtney works with coastal management and sees firsthand that oceanic change disproportionately impacts the people least capable of adapting to them. “Coastal communities in the Pacific are bearing the brunt of climate change impacts from severe storms, coastal inundation, and coral bleaching,” she says. “I’ve worked in many of these communities that inhabit small low-lying islands and coastal areas. Coastal communities in rural areas are highly dependent on marine resources for food security and livelihood, so they can’t just move inland. They are also among the most vulnerable to natural hazards and climate change impacts.”