A study published in the journal Procedia noted that “abrupt population decline” might have occurred in the far past due to the ancient “eruption of the super volcano Toba on the island of Sumatra about seventy thousand years ago.” The Roman Empire saw the deforestation of much of the Mediterranean during its centuries-long expansion. And in the space of three decades, the Soviet Union destroyed the Aral Sea in a matter of decades due to the diversion of water.

The environmental issues we face today are radically different than those humanity had to deal with in previous generations, and this post will offer a list of environmental problems and solutions we can address today. 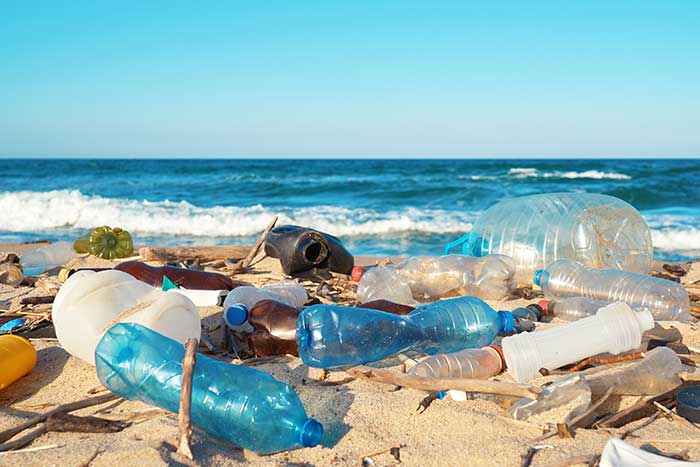 Largely considered the most urgent and impactful contemporary environmental crises by scientists and other experts, climate change is the most high-profile challenge facing the world today. For years, public figures such as Al Gore and Greta Thunberg have sounded the alarm regarding growing carbon dioxide concentrations in the atmosphere, which pundits fear could lead to a lingering increase in global temperatures for centuries to come. Georgetown University states, “Scientists predict that if the increase in greenhouse gas emissions continues unabated, temperatures will rise by as much as 10 degrees Fahrenheit by the end of this century.” Georgetown also noted that “the five warmest years on record have occurred in the last decade.

Unfortunately, the way forward on climate change isn’t easy to chart. In 2019, U.N. Secretary-General António Guterres stated, “We need more concrete plans, more ambition from more countries and more businesses. We need all financial institutions, public and private, to choose, once and for all, the green economy.” Unfortunately, not all nations have gotten on board with this way of thinking. For instance, Carbon Brief noted that China has regularly been responsible for a tenth of all human-prompted climate change.

One of the top environmental problems facing the world is the challenge of natural resource use. Virtually all economic activity ties into natural resource use, and many environmental activists decry not only the rapid exploitation of various inputs, but also the growing gulf between the wealthy and the less advantaged. For instance, the use of water by one community can threaten the existence of another and even permanently alter nature itself.

Managing this challenge will require forward-thinking planning and taking into account the environmental impact. As the U.N. Environment Programme states, “We are facing a historic choice about how we use resources and the report scopes the potential of innovation, rethinking economic growth and the role of cities in building more resource efficient economies.”

Waste management and production is a key point that numerous environmental issues articles highlight. Dramatic pictures of refuse-choked waterways and giant floating patches of oceanic waste have highlighted the dangers of improperly disposed plastic. Similarly, electronic waste represents both an environmental danger and a missed opportunity given the inherent value of computers, peripherals, cellular phones, and other electronics that get tossed rather than recycled. In fact, the EPA states that only about one-quarter of all e-waste gets recycled.

And then there’s the challenge of food waste. Not only do consumers in developed countries throw away large amounts of food due to its appearance, but substantial losses also occur early on in the growth cycle. The Journal of Agricultural Science notes that “among crops, the total global potential loss due to pests varied from about 50% in wheat to more than 80% in cotton production. The responses are estimated as losses of 26–29% for soybean, wheat and cotton, and 31, 37 and 40% for maize, rice and potatoes, respectively.” The need for environmentally friendly pest-remediation measures is more important than ever to avoid further stressing the planet.

Earth has been called the Blue Planet due to the proliferation of water on its surface, but far less of that liquid is potable than the casual observer might think. According to the World Wildlife Federation, “Only 3% of the world’s water is fresh water, and two-thirds of that is tucked away in frozen glaciers or otherwise unavailable for our use. As a result, some 1.1 billion people worldwide lack access to water, and a total of 2.7 billion find water scarce for at least one month of the year.”

To make things even worse, water pollution puts potable water supplies at risk. “The United Nations World Water Development Report 2017” found that “globally, it is likely that over 80% of wastewater is released to the environment without adequate treatment. … Increased discharges of inadequately treated wastewater are contributing to the further degradation of water quality in surface and groundwater. As water pollution critically affects water availability, it needs to be properly managed in order to mitigate the impacts of increasing water scarcity.”

Data from NASA shows that forests cover nearly a third of the world’s landmass, and they play an incredibly important role in the wider environment. For example, forests:

Unfortunately, developing nations too often resort to practices such as slash-and-burn clearing and failing to care for the soil afterward, which perpetuates a vicious cycle requiring the clearing of yet more trees.

While fishing supports human populations across the globe and isn’t inherently harmful to the wider world, poor fishing practices can cause lasting harm. How? When more fish get harvested than current populations can produce, a deficit develops. If such deficits continue unabated, fisheries can become economically unviable, endangered, and even extinct.

Sometimes this occurs not due to the specific targeting of a species, but because of incidental and unintentional catches. In addition to the elimination of harmful subsidies, the establishment of technologically advanced fishing methods, fishing rights, and public education can safeguard at-risk fisheries.

Few laymen are aware that the ocean absorbs almost a third of the carbon dioxide released into the world. Even fewer know that increased carbon emissions can also impact water quality, altering the pH of the ocean itself. The National Oceanic and Atmospheric Administration has noted that the past 200 years has seen “approximately a 30 percent increase in [ocean] acidity,” which directly impacts so-called “shell building” creatures. Studies have linked reef bleaching, reef death, mollusk death, and ecosystem disturbance to this increasing acidification.

Like many environmental risks, air pollution doesn’t impact every corner of the world the same. Whereas many western corporations have learned what is environmental sustainability in business, the same can’t be said for other areas. WHO reports that, “in the Western Pacific Region alone, around 2.2 million people die each year” from air pollution.

Reading about the challenges facing the environment can feel daunting and solving the issues of Spaceship Earth may seem impossible. Yet there’s still hope! NREPSM certified professionals and other environmental workers are making strides each and every day to safeguard the globe.